Eatings and drinkings and sexings

Thus saith the dear and beloved Dr. Fore.
Posted by Dr. Fore at 1:02 PM No comments:

My Thought about life

What is on my mind? Consciousness captured in time and space by a vessel that is doomed by a terminal disease with no known end game.  Before life consciousness is a baby and as that baby is born, it cries.  Consciousness begins with a baby crying and ends with the baby's family crying.

Where does that Consciousness go?    That of course is the question not answered through out history.   When we die?


The physical body that retains that consciousness is built of molecules and instincts and other stuff, and likes sports and music and thrives on eatings and drinkings and sexings and creating art and culture that the consciousness seems to compel the  body to create for fullfillment to the spirit.... Art and Music.   The spirit being the expression of the Consciousness. in the body...  Art and music:   The expressions of the Consciousness and therefore, perhaps, the meaning of the Spirit of Man?   Reference::   http://en.wikipedia.org/wiki/Herbert_Read
Posted by Dr. Fore at 11:03 AM No comments:

The Band of Four

Lisa, David, Myrna and Forrest with our French B&B lad who makes great calvados and his doggie Captain Nemo who was ready to pee on Myrna..... 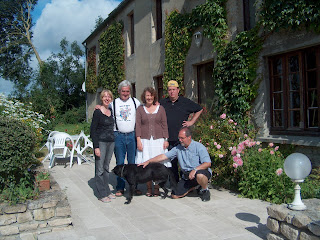 An American in Europe

An American in Europe

I first came to Holland in 1980. Like many of my generation, baby boomers, I was transfixed by being in Europe, Europe the land of many wars, the bloody womb of the United States before the great war, World War II. I spent many vacations thereafter visiting the many grave yards in the Netherlands with my wife’s mother’s brother, both who survived the so called Bridge Too Far battle in Arnhem. I even read the book about that battle and have watched that movie and many others about the Allied incursion into nazi oppressed countries. The Longest Day, Saving Private Ryan, the Band of Brothers , Hart’s War and so forth. Stories of our fathers and mothers, the Great Generation.

What was remarkable to me the American, as I had been at the Diamond Head America Cemetery: white crosses and stars filled the bowl of that former volcano, whereas the Dutch cemeteries: over grown gardens basically. More striking was that not only there were the Dutch buried but all the Allied nations, including Russia. In 1980 that impressed me deeply. This was at the height of the Cold War. (editor’s note: the Russians were a major component in the success of Normandy as I read history. Good on the Dutch for their inclusion of Russian warriors in their graveyards.)

My mother-in-law kept talking Normandy to me, for years. I finally got there years later but allow me one digression. I went to Luxembourg with some also Americans and Canadians in Europe. In Luxembourg is a cemetery run by the Americans and it reminded me of the Hawaii cemetery. Pure white crosses and stars of David in measured rows with freshly cropped grass. There is an explanation of the Battle of the Bulge when Charlie Company and George Patton and George’s Third Army gave the nazi’s a new rear end.

What was beautiful in Luxembourg is that the General is buried at the top of the cemetery with just a plate with his name. Nothing further. Just. Just the General with his boys. I understand that Patton’s people made sure no monuments were built to him. The family got their wish and is very impressive how he is honored. I was moved also as when we visited there they were playing taps for some family who were there from maybe Ohio (some place from the USA heartland) to pay tribute to their lost kin and warrior. Tears and snot

I finally got to Normandy a couple of years of ago and it is awesome. So well done, pure white crosses and stars of David and fresh cropped grass, but what is more impressive, the cemetery lies right on the beach were all the action happened. Pont Du Hoc is the point of the area that Army Rangers scaled and as featured in Saving Private Ryan. Pont Du Hoc is a few meters up the beach from where the cemetery lies. In good weather and peace times, it is an awesome view of the troublesome North Sea. Beautiful views. We Euro-Canadian-Americanos got sun burned that day. The day of the launch of the greatest war battle in history the weather was typically as it is, bad.

I wrote a reflection about Normandy and that is what this story is about. My hero is Ike. He must have had iron gonads when he gave the Order. In the Longest Day, Ike is there in a little conference room deciding with all the weather reports and his multi-national staff with him. After deep soul searching, Ike looks out the window, hesitates and then says to his staff: WE GO. My reflection is based on a word from each of my friends, Lisa, Myrna and David, like Ike. We the representatives of the Everyman, each with his own story of valor and dreams.

This however is a tribute to Ike.

During the first six months of 1944, the United States and Great Britain concentrated land, naval, and air forces in England to prepare for Operation Overlord, the assault on Hitler's "Fortress Europe." While the Soviet Union tied down a great portion of the enemy's forces, the western Allies marshaled their resources, trained their forces, separately and jointly, for the operation, and fine tuned the invasion plans to take full advantage of their joint and combined capabilities.

Before the invasion, the air and sea components played major roles. The 12,000 planes of the Allied air forces swept the Luftwaffe from the skies, photographed enemy defenses, dropped supplies to the resistance, bombed railways, attacked Germany's industries and isolated the battlefield. The Allies' naval component was similarly active during the buildup. The navies escorted convoys, patrolled and protected the English Channel, reconnoitered beaches and beach defenses, conducted amphibious rehearsals and organized and loaded a mighty flotilla to land the assault forces in France.

Meanwhile, the nine army divisions (three airborne and six infantry) from the United States, Britain and Canada trained and rehearsed their roles in the carefully choreographed operation. Rangers climbed cliffs, engineers destroyed beach obstacles, quartermasters stockpiled supplies and infantrymen waded through the English surf as each honed the skills necessary for the invasion's success.

The vistas of Pont du Hoc are breath taking with the sun and clear skies. Ike of course was faced with the well known soggy weather of the English Channel. One can only imagine what he felt when there was a bit of rest in the bad weather and said "We Go." The entire march of history must have been upon his shoulders.

Of course I would say holes but David correctly named them craters. From the air and sea the Allied's bombed the German bunkers at Point du Hoc. The craters are now grown over with grass and bushes. Very large and much ordnance came from the sky and seas. A fearful site to be at if one was on the ground.

Before the troops landed, the Airborne dropped behind enemy lines. Floating down from the heavens, this was the first line of attack. Seeing that entire region now, it is miracle that in such a large area of land the Airborne was able to find each other and begin their mission. (editor’s note: Longest Day has the great description of this)

Pont du Hoc is in a strategic position to view the coast and the long beach which includes Utah Beach, Omaha Beach and the other points of attack. The cliffs are virtually impossible to climb on a nice day. The Rangers who were dispatched at Point du Hoc faced fierce enemy fire from above. Of the 200 or so Rangers dispatched, 90 survived.

From privates to captains, their names are listed at the memorial center. (editor’s note: Myrna is our Canadian married to a Frenchman of our visit, RIP, Myrna’s Husband). The Dutch especially love the Canadians as when Patton was kicking ass through the Ardennes, the Canadians were cleaning up in the Netherlands)

Of course this needs no more words other than may they rest in peace.


Common men and women of valor who had a dream to defeat fascism. That is Normandy.
Posted by Dr. Fore at 8:12 AM No comments: 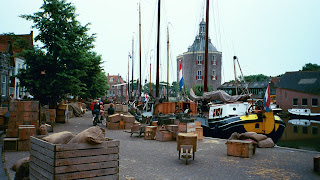 In a further review in regard to our friends the animals I submit this about the strange bird, the Ostrich

A man walks into a restaurant with a full-grown ostrich behind him. The waitress asks them for their orders.

The man says, "A hamburger, fries and a coke," and turns to the ostrich,
"What's yours?" "I'll have the same," says the ostrich.

A short time later the waitress returns with the order. "That will be $9.40 please." The man reaches into his pocket and pulls out the exact change for payment.

The next day, the man and the ostrich come again and the man says,
"A hamburger, fries and a coke." The ostrich says, "I'll have the same."
Again the man reaches into his pocket and pays with exact change.

This becomes routine until the two enter again. "The usual?" asks the waitress.
"No, this is Friday night, so I will have a steak, baked potato and a salad," says the man. "Same," says the ostrich.

Shortly the waitress brings the order and says, "That will be $32.62."
Once again the man pulls the exact change out of his pocket and places it on the table.

The waitress cannot hold back her curiosity any longer. "Excuse me, sir. How do you manage to always come up with the exact change in your pocket every time?"

"Well," says the man, "several years ago I was cleaning the attic and found an old lamp. When I rubbed it, a Genie appeared and offered me two wishes. My first wish was that if I ever had to pay for anything, I would just put my hand in my pocket and the right amount of money would always be there."

"That's brilliant!" says the waitress. "Most people would ask for a million dollars or something, but you'll always be as rich as you want for as long as you live!"

"That's right. Whether it's a gallon of milk or a Rolls Royce, the exact money is always there," says the man.

The waitress asks, "What's with the ostrich?"

The man sighs, pauses and answers, "My second wish was for a tall chick with a big ass and long legs who agrees with everything I say.."
Posted by Dr. Fore at 6:30 AM No comments:

Dr. Fore
An American in Holland